Ajay Anand is an associate professor and serves as the deputy director of the Goergen Institute for Data Science where he is responsible for managing the data science education program and identifying opportunities for expanding curriculum offerings. Ajay also leads the data science capstone and practicum courses working with external industry and non-profit organizations.

Ajay has more than 12 years’ experience at Carestream Health and Philips Research, working as a senior research scientist and technical project leader in the area of medical ultrasound and biomedical signal processing. He is a co-inventor on more than 40 patents and applications, and has co-authored more than 35 journal articles and conference proceedings. His technical interests are in time-series analysis, physical model-based predictive analysis, and biomedical data analytics. 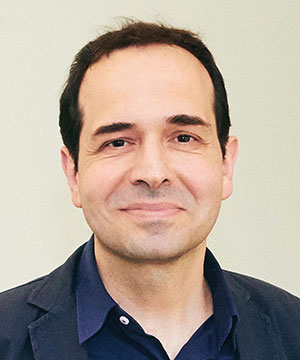 Mujdat Cetin is a Professor of Electrical and Computer Engineering and the Robin and Tim Wentworth Director of the Goergen Institute for Data Science at the University of Rochester. He is also serving as the Director of the New York State Center of Excellence in Data Science. Previously he served as a faculty member at Sabanci University, Istanbul, Turkey, and as a Research Scientist at MIT. He also held visiting faculty positions at MIT, Northeastern University, and Boston University.

Gloria Culver is the dean of the School of Arts and Sciences. In this role, she handles matters relating to 18 departments and 12 programs covering the areas of arts and humanities, social sciences, and natural and physical sciences. She is involved in the recruitment and review of faculty in tenure-track and non-tenure track positions, and strategic and budget planning.

Culver received her BA in biology from Ithaca College in 1988, and her PhD in biochemistry from the University of Rochester in 1994. Before joining the Rochester faculty in 2007, she was an assistant and associate professor in the Department of Biochemistry, Biophysics, and Molecular Biology at Iowa State University. She has served as chair of the Rochester biology department since 2010.

Culver’s research centers on the assembly of ribosomal machinery essential for the growth of all cells. Her research has received funding from NIH, the American Cancer Society, and NSF.

Stephen Dewhurst is vice dean for research at the University of Rochester School of Medicine and Dentistry (SMD), dean's professor, and chair of the microbiology and immunology department. He has been a member of the University’s faculty since 1990, and served as senior associate dean for basic research at SMD from 2007 to 2009. He is a molecular virologist, with more than 20 years of experience in HIV/AIDS research. He also founded and directs the the UR’s NIH-funded Rochester Partnership for Research and Academic Career Training of Deaf Postdoctoral Scholars. He has extensive experience with graduate teaching and mentoring, and received the University’s William H. Riker Award for Graduate Education in 2008.

Wendi Heinzelman is a professor in the Department of Electrical and Computer Engineering at the University of Rochester, and holds a secondary appointment in the Department of Computer Science. She also serves as the dean of the Hajim School of Engineering at the University of Rochester. Heinzelman received a BS degree in electrical engineering from Cornell University in 1995 and MS and PhD degrees in electrical engineering and computer science from MIT in 1997 and 2000. Her current research interests lie in the area of wireless communications and networking, mobile computing, and multimedia communication. Heinzelman is a member of Networking Networking Women (N^2 Women) and the Society of Women Engineers (SWE), a distinguished scientist of ACM Sigmobile, and a senior member of the IEEE Communications Society and the IEEE Signal Processing Society.

Michael Scott received his PhD in 1985 from the University of Wisconsin - Madison. He has been at the U of R since then. He chaired the CS department from 1996 to 1999, and again on an interim basis in 2007 and in 2017. From 2014–2015 he was a visiting scientist at Google. He is best known as a co-creator of the MCS mutual exclusion lock and the author of Programming Language Pragmatics, a popular textbook on programming language design and implementation. Several algorithms from his group have been incorporated into the Java standard library.

John A. Tarduno is Professor of Geophysics in the Department of Earth and Environmental Sciences at the University of Rochester, where he also holds a dual appointment as Professor of Physics & Astronomy. His research centers on the application of paleomagnetism to problems in geodynamics, geomagnetism and environmental change.

He received a BS degree in geophysics from Lehigh University (1983) and an MS and PhD in geophysics from Stanford University (1987). After postdoctoral work at Stanford and ETH-Zurich, he was Assistant Research Geophysicist with Scripps Institution of Oceanography (1990-1993). He joined the Department of Earth and Environmental Sciences at the University of Rochester in 1993, where he founded the paleomagnetism laboratory. He has served as co-chief scientist on an ocean drilling cruise in the Pacific Ocean, and led field research in Australia, Botswana, India, Japan, Lesotho, New Zealand, South Africa, Swaziland, and Zimbabwe. He has also led scientific expeditions to the High Canadian Arctic and the Sahara.

John is the recipient of numerous honours, including a Guggenheim Fellowship, election as Fellow of the American Geophysical Union and Fellow of the American Association for the Advancement of Science for "providing large-impact contributions to the study of Earth's paleomagnetic record and for a matching mentoring outreach to students in this geophysical discipline." Most recently, he was awarded the Price Medal of the Royal Astronomical Society, for investigations of outstanding merit in solid-earth geophysics, oceanography, or planetary sciences, and the Petrus Peregrinus Medal of the European Geosciences Union.

He is also an avid cyclist, participating in local centuries and duathlons. He also enjoys trail running and snowshoe racing.