The original 17 bells of the Hopeman Memorial Chime are displayed on the Eastman Quadrangle before being installed in the Rush Rhees Library tower in 1930.

Bells have rung on campus since the dedication of Hopeman Chime in 1930 as a living memorial forArendt Willem Hopeman, a ringing celebration of public music and Dutch culture. The Hopeman family were specialists in shipbuilding, carpentry, and engineering.

The original bells were cast at the Meneely Bell Foundry in Watervliet, New York at a time when precision large bell tuning was being developed in America.

Two Petit and Fritsen bells were added to the chime in 1956.

When repairs became necessary for the heavy chime, installation of a lighter weight new carillon was thought to be a wiser financial choice than repair.

The objective was to gain a substantial reduction in vibration from 16+ tons to 3.5 tons, as recalled by David Caldwell. The Hopeman family approved the purchase and assisted with the necessary change out of girder attachments to support the new instrument.  The carillon was purchased from Eijsbouts Bellfoundry Ltd.  of Asten, Netherlands. The History Department allows for viewing the original documentation of the purchase.

Of the removed Meneely bells, one was given to the Hopeman family as a keepsake, later sold in an estate auction.

The 6 smallest Meneely bells went to Christ Church, 141 East Avenue, Rochester, together with an Eijsbouts treble (total 7) where they play automatically on the quarter hour.

The larger bells had to be cut in pieces to be safely removed through the building elevator. Their bronze was shipped to Europe to be reformed into a new bell set. The value of the bronze provided credit against the overall purchase of the new Eijsbouts  bells.

The Eijsbouts Bellfoundry, Ltd. carillon bells replacement for chime were cast in Asten, Netherlands. Though the number of carillon bells is much bigger than the original chime, it is also much lighter. The carillon’s 50 bells cover more than four octaves yet fit into the space left by the removed chime.

Weather was so cold and snowy the bells had to be swept off by Facilities during the concert to keep bells from muffling under a blanket of snow according to Abbenes.

View photos from the 1973 installation.

Announcements of the Carillon Dedication Concert:

Students served as bellmen from 1949 to 1953, when the Bellman Society was founded to provide undergraduate students opportunities to play the chime. From 1930 to 1973, while the chime was in service, 98 individuals performed as bellmen. The 2-octave keyboard was electronic.

The first person to play the new carillon was Dutch carillonist Arie Abbenes, who performed at the dedication concert in 1973 and stayed on campus for several weeks to help train new carillonists.

Bellman Society transitioned to UR Carillon Society. The carillon became sponsored by the River Campus Music Department played by a series of students, staff, and faculty across the years.

“I was a member of the student Bellman Society starting in the fall of 1971, played the chime until it was replaced in 1973, and played the carillon until mid-1975. ...I returned to Rochester in the summer of 1978, became the University Carillonist that fall and continued until late 1989.”

Carillon students play manually from a touch sensitive console, quite differently from the former chime.

Student and guest carillonists perform on the instrument throughout the year, and an electronic system is programmed to chime on the quarter hour. The traditional "Westminster Quarters" (or "Big Ben" chime) was replaced during the University's sesquicentennial celebration in 2000 by the "Rochester Quarters," composed by former Department of Music professor Daniel Harrison. (The "Westminster Quarters" returned in 2004.)

Hear the "Rochester Quarters" as the clock strikes noon.

The original Hopeman Memorial Chime was given to the University in memory of Arendt W. Hopeman by his daughter and two sons in 1930. Arendt Hopeman founded A.W. Hopeman Builder in 1869. The company served as the general contractor of the River Campus from 1927 to 1930, and also built the Eastman Theatre, Eastman School of Music, Eastman Kodak headquarters, and other Rochester landmarks. The Hopeman Engineering Building on River Campus is also named for him.

His daughter Margaret Hopeman was a 1903 alumnus of the University and received her master of arts degree from Rochester in 1906. His son Albert A. Hopeman served as president of the newly named A.W. Hopeman and Sons, as well as chairman of the board of Hopeman Brothers, a shipbuilding jointer firm. His brother Bertram Hopeman served as treasurer of Hopeman Brothers. 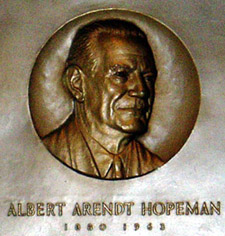 With Your Generous Support to the Hopeman Carillon Fund

The initial phase of the restoration began on August 24, 2017 and was completed on August 29, 2017 (see a photo essay here). The 32 smaller bells were removed and loaded on a trailer to have their clappers rebuilt/refitted in Meeks & Watson’s workshop in Ohio. The largest of these "small" bells was 12–14” in diameter and about 150 pounds. The 18 largest bells were too large to move. The clappers, however, were removed and replaced with new clappers.

In September, Meeks & Watson returned to replace the now-refurbished smaller bells. After some adjustments and a return trip, the bells are ringing again. And they sound fantastic!

The next chapter in the restoration saga will be upgrades to the carillon keyboard, a new "umbrella system" (which prevents water that collects at the base of the tower from leaking into the cabin—and on the keyboard—should the water rise above a certain level) and refurbishment repairs to the bell lantern and 1930’s era chime girders holding the weight of the carillon.

The bell lantern edifice and carillon are supported by 1930’s construction era girders, brick, and roofing. Nearing the 100 years mark these need repair and restoration. Although it looks small from the ground the bell lantern is several stories in height.

Definition:  A protective cover at the base of the wire for the purpose of shedding water before the wire enters through the chimney to the lower cabin and console.

Definition:  A turnbuckle device located immediately above each manual key. It allows the performer to compensate for changes in wire length due to temperature changes, so that the clapper is always in the correct position, neither too close to nor too far from the bell. (GCNA Glossary)

Present turnbuckles are infinitely adjusting but do not lock to hold an adjustment throughout a concert. Frequent readjustments must be made.

If you wish help with the restoration funding, your charitable contribution is most welcome. And thank you to all those already supporting the restoration via donations to the Hopeman Carillon Fund.

That being said … let the bells ring out!