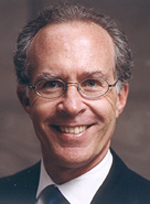 JD, Yale, 1975. Bankruptcy law. President of the University of Rochester, 1994-2005.  During President Jackson's administration, the University underwent a number of significant developments, including the integration of separate schools into the College of Arts, Sciences, and Engineering; decentralization of the University's principal divisions; implementation of the nationally noted Renaissance Plan, providing a significant improvement in the quality of the College's student population; revitalization of the Medical Center as a nationally recognized center for patient care and research; and distinctive curricular innovations throughout the University.  Author of bankruptcy and commercial law texts used in law schools across the country. Has served as Special Master for the U.S. Supreme Court in a dispute involving every state in the country over the disposition of unclaimed dividends held by brokerage houses. Former Vice President and Provost of the University of Virginia. Former Dean of Virginia's School of Law. Formerly on the law faculties at Stanford, Harvard, and Virginia. Clerked for U.S. District Court Judge Marvin E. Frankel in New York in 1975-1976. Clerked for Supreme Court Justice William H. Rehnquist in 1976-1977.