The Mathematics of M.C. Escher

The Department of Mathematics at the University of Rochester presents alumna Doris Schattschneider '61, professor emerita of mathematics at Moravian College, as part of this year’s G. Milton Wing Lecture Series.

Her public lectures as part of the series include the following:

Mathematics and the Art of M.C. Escher

The imagery in M.C. Escher’s graphic works not only makes obvious use of geometry, but often provides visual metaphors for abstract mathematical concepts. This lecture examines mathematical concepts implicitly in several of Escher’s works, outlines the transformation geometry that governs his interlocking figures, and reveals how this “math anxious” artist actually did pioneering mathematical research in order to accomplish his artistic goals.

Lessons in Duality and Symmetry from M.C. Escher

Escher (1898-1972) carried out mathematical investigations that led to symmetry drawings of three distinct kinds of tilings with two colors, capturing the essence of duality. In his prints he used several of these drawings as key elements that further expressed ideas of duality. One of the most complex of his “duality” tilings was realized in Delft ceramic tile, wrapped around a large column for a school in Baarn, Holland. Recently, a Salish artist in Victoria, British Columbia, has independently produced a tiling that contains many of the same elements as Escher’s complex duality tilings.

From 1938 to 1942, Escher carried out experiments in printing repeating patterns with small carved wooden squares that contained a simple motif of crossing bands, using a purely algorithmic scheme. He asked and answered combinatorial questions about these patterns and opened the door to many tantalizing questions that have recently been addressed by mathematicians and computer scientists.

The lecture series is organized in conjunction with the Memorial Art Gallery’s exhibition M.C. Escher: Reality and Illusion, which runs from November 13, 2016–January 29, 2017.

Drawn from the world’s second-largest private collection of Escher’s work, the exhibition includes 120 of his creations, from early figure drawings and lesser-known book illustrations, to detailed Italian landscapes and the “tessellations” for which he became famous.

Learn more about the Escher exhibition. 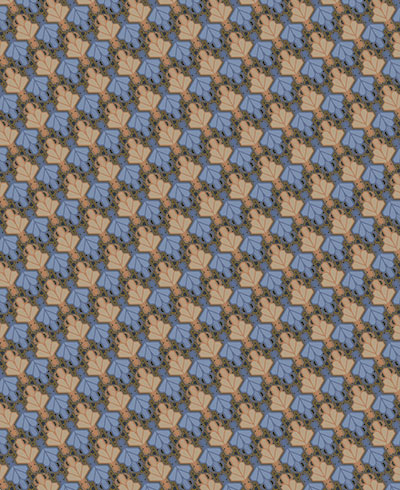