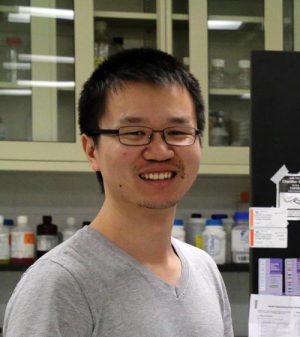 I joined the lab in 2012 to study a fascinating creature–the Naked Mole Rat (NMR), one of the only two eusocial mammals in nature. These animals possess a maximum lifespan of 32 years, making it the longest-lived rodent in the world! If these facts are not fascinating enough, then the cancer resistance and negligible age-associated degeneration would ensure you to say: “that’s interesting!” In my PhD study, I aim to study the stem cell biology of the NMR compared to the short-lived mouse, investigate the mechanisms underlying such stem cell characteristics, and translate the NMR mechanisms into mouse models.

I have discovered that the NMR hematopoietic stem cells (HSCs) are extremely quiescent and turnover slowly, mediated by an extensively increased amount of niche component, hyaluronic acid (HA), compared to short-lived mouse. Overexpressing HA in transgenic mice has shown to facilitate LT-HSCs maintenance. I have also discovered that HA synthase expression declines during aging.

Currently, I am working on rejuvenating aged HSCs via modulating the HA expression in the niche. I have also found that the NMR HSCs have an erythroid-biased fate and produce significantly more erythroid progenitors than the mouse HSCs, in both bone marrow and spleen, which represents young HSCs characteristics. This is an adaptation to strictly subterranean lifestyles. The recent data has shown the unique biological activity of NMR erythropoietin might mediate such erythroid-biased differentiation.

I am also the NMR keeper in the lab; maintaining and expanding thriving NMR colonies is my mission. Getting so close to NMRs and observing their eusocial behaviors is a privilege!